Home » How to Fix a Laptop Power Jack Without Soldering

How to Fix a Laptop Power Jack Without Soldering 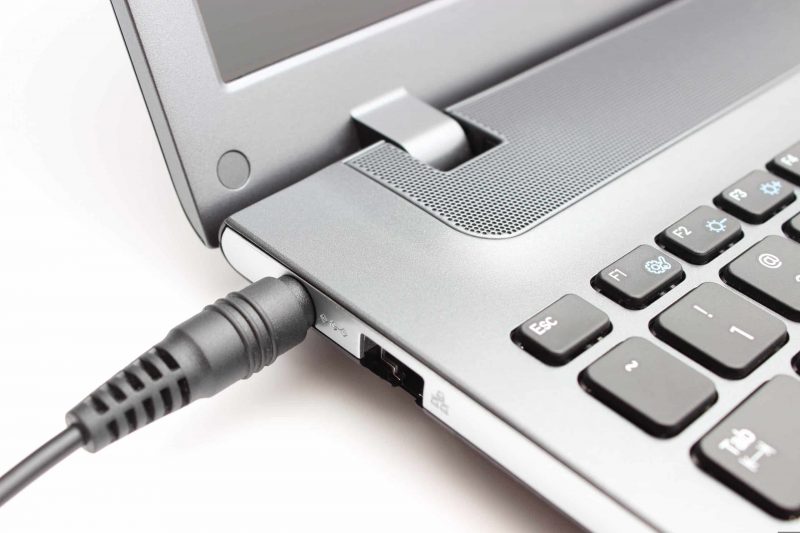 You plugged in your laptop to charge it, but you noticed that the battery icon did not change. You try to unplug it and plug it back in and you see it starts working but then stops shortly after. After wiggling the jack a bit, you notice that it starts charging. You realize that your laptop power jack is broken. So, how to fix the laptop power jack without soldering?

Unfortunately, most methods require you to do some soldering. This is because laptop power jacks are generally soldered onto the motherboard and cannot be removed without the use of a soldering iron. You can get a very cheap soldering iron if you want to fix this yourself or ask a friend if they have one.

Remember that using a soldering iron can be very dangerous if you are not careful, so wear protective gear when you do this.

We will first go over one method that you may have success with that does not require any soldering and then move on to other solutions. Hopefully, your laptop will charge again by the end of this.

Repairing the Power Jack Without Soldering

If your laptop power jack is not soldered but instead plugged in using wires, then you are in luck. All you have to do is replace it with a new one and that’s it. You can get a power jack in almost any electronics store. And you can use the old power cords to plug it in if they are still functional. Otherwise, get any thick wires that can handle the voltage needed to charge your laptop.

Once you have the right power jack, you may have to solder the wires onto the motherboard. You will have to solder them exactly how they were soldered previously while the old power jack was still in place. After you soldered the cables put the new power jack into place. You may have to use a hot glue gun to hold it in place. Test the new power jack by making sure that it is not using more power than it is supposed to with a multimeter.

If your power jack works fine but it wiggles around, then you can use a hot glue gun. You still probably have to open the laptop and do it from the inside because it will hold better that way.

If your power jack is soldered on, then your options are going to be limited. There are two types of soldered power jacks – those that are with a wire and those without a wire. If it is with a wire, there is a very small chance that you will not have to remove the old one. You first need to get the correct power jack for your laptop.

Once you have one, disassemble the laptop and try to unplug the old wire, and plug in the new power jack. Next, use some hot glue to put the new power jack in place. You will probably have to remove the old one, so try to gently pry it off using a pair of pliers if you do not have a soldering iron. Once you got everything in place, check to see if it works.

If your power jack does not use wires to transfer power, then you will pretty much have to use a soldering iron. Again, you want to get the exact power jack that fits your motherboard. You will have to remove the whole motherboard because you will have to desolder from the bottom side. That is where all the connectors are located.

First, identify all the bits that belong to the power jack. Next, use your soldering iron and desoldering wire to heat the solder on the power jack to remove it. After you removed most of the solder, use pliers to pry it off or use a screwdriver to push it out from the other side.

Make sure to use flux when soldering. Not using it will result in an improper solder and the jack will end up being wobbly. After you have soldered on the new power jack, it should be done and you can test to see if it works.

Do not worry if the traces that connect your power jack and your motherboard got burned from overheating or voltage issues. You can repair them yourself at home without any professional help. You first need to prepare the motherboard for soldering by cleaning it and removing the protective coating in places where you want to solder. You can remove the protective enamel with any sharp object. An Exacto knife is perfect for this. Only scratch until you get to the metal.

When inspecting a trace for damage, you must check the whole trace from one point to another and repair all spots that are damaged. Even if you see some visible damage on one part, there may be more damage elsewhere that is much less noticeable.

After doing all the necessary preparation, it is time to pick up your soldering iron and solder. You probably want to use wires on the most damaged spots as a bridge. Use thick wires for the power jack, preferably those that are made of copper.

How to Fix Wobbly Power Jack

If your power jack works just fine, but you have noticed that it is very wobbly, there is a simple solution. You will just need some hot glue, super glue, or any other adhesive for this. You want to open the laptop and locate the power jack. Next, use as much glue as you need to make sure that it stays in place. If you are using a hot glue gun, you can pretty much put it everywhere around the power jack and it should keep it in place.

A wobbly power jack is very dangerous because it can cause a short circuit or snap off, which will make it much more difficult to repair in the future. If you just replaced your power jack and noticed that it is wobbly, then you maybe did not solder it well enough. You need to use enough flux to make sure that the solder is solid.

Check Also: How to Charge a Laptop Without a Charger

Can I Reuse the Old Power Jack?

In most cases, you will not be able to reuse the old power jack because it is damaged or does not work at all. You can get a replacement part in almost any electronics store, just make sure that it is the same one. You can only reuse the old power jack if it works just fine but got a bit wobbly or the cable got damaged. If the cable is the problem, simply replace it and you are good to go.

I Replaced the Power Jack, but the Laptop Still Won’t Charge

If your laptop still does not want to charge, then it could be a faulty battery. Or perhaps your power adapter is not working. You should troubleshoot both and try to make them work before getting replacement parts. If you know that your battery and power adapter work, then maybe you did not plug the power jack incorrectly or the soldering was not done properly. If that is the case, you will have to do it again.

Fixing your laptop power jack without soldering is only possible if the power jack is connected to the motherboard via a cable that can be plugged out. Even then, you still may have to desolder the old power jack to remove it. If your power jack works fine, but it wobbles whenever you touch it, then fixing it is not a problem. You just have to open the laptop and use some hot glue to keep it in place.

However, in most situations, you will have to use a soldering iron to fix your laptop power jack. It is still better and much cheaper to do it at home instead of taking it to a professional. More often than not, they will not try to replace the power jack but will instead throw the whole motherboard out and put in a new one.

That can cost hundreds of dollars instead of $20 to remove the old power jack and put a new one in. Getting a soldering iron and learning how to use it is a good idea and it might become your new hobby. Just remember to wear protective gear and make sure that the room is well-ventilated.

You May Also Like: How to Remove a Battery from a Lenovo Laptop

How to Connect a Laptop to a Blu-ray Player Wirelessly

How to Use a Laptop as a Monitor for Xbox One

How to Use Your Laptop as a Monitor for Switch