Home » How to Remove a Battery from a Lenovo Laptop 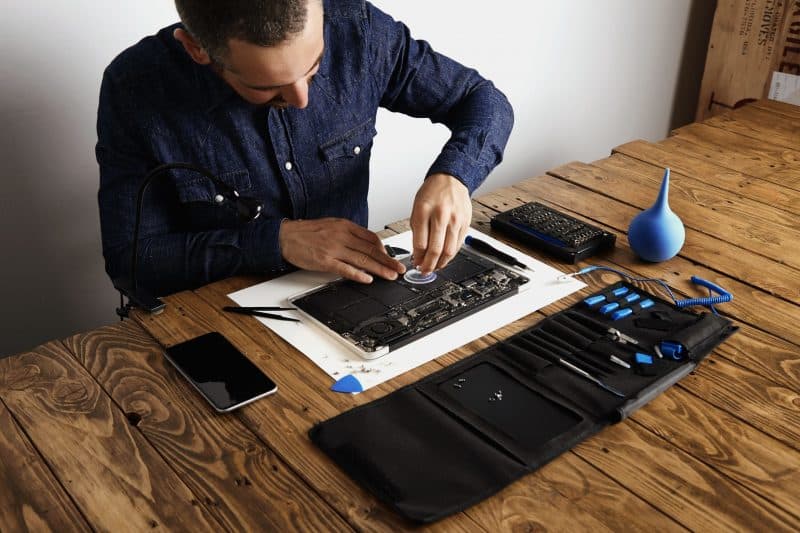 Removing your laptop battery is a straightforward process. Most Lenovo laptops have batteries that slide out, which makes it very easy to remove or change the battery. However, some models, like the Lenovo IdeaPad 110-15IBR, have to be opened to remove the battery. We will show you how to remove both types of batteries.

If you are removing the battery to replace it with a new one, make sure that it is compatible and that it is the original battery. You can check whether the label is the same just to be safe. Now, here is how to remove the battery from the Lenovo laptop.

Most Lenovo laptops use a simple latch mechanism that is pretty straightforward. Some use one latch, others use two latches.

Here are the steps on how it is done:

However, if your Lenovo laptop does not have a battery that uses latches but is instead a built-in battery, do not worry. Bear in mind that Lenovo has no responsibility for your breaking something if you do not do it correctly. You will have to be a bit more careful with this one. If you want to proceed, removing it is very easy.

Here is how to do it:

Now that you have removed the old battery, you probably want to replace it with a new one. Make sure that your new battery is an OEM part that is compatible with your model. Do not use a battery that is not made by Lenovo because you can damage your laptop or it can burst into flames.

Once you got the new battery out of the box, it is time to put it in. You will pretty much do the opposite of what you did to remove the first one.

That is all you have to do. It is a very simple process if your battery is removable. However, users that have a Lenovo laptop with a built-in battery will have to do a few more steps.

Getting the right battery for a model that has a built-in one is a bit harder as you can’t really check which battery model it exactly is until you remove it. If the battery you bought is an OEM part and says that it is compatible with your laptop model, then you will be good to go. If not, double-check that the new and old batteries look the same and have the same sticker label before putting it in.

After that, here’s how it is done:

See Related Topic: How to Charge a Laptop Without a Charger

Lenovo says that they have zero responsibility if you use an unauthorized battery. Cheap knock-off batteries can damage your laptop or even burst into flames. This is not a risk worth taking just to save a few dollars. Nobody likes their laptop igniting or exploding, so make sure that the battery is original.

Also, even if the battery works just fine, it is not nearly as good as the OEM part. It will probably work fine for a few months and then lose battery life rapidly, making you end up in the same place as you were before replacing it.

When to Replace the Lenovo Battery

You should only replace the battery if it is broken or physically damaged. You can use the Lenovo Solution Center to see whether your battery is defective. It is normal and expected that your battery life goes down as the years go by and from regular use. You will not get the same five or six hours of battery life that you had when the laptop was new.

If you are not happy with the battery life that you have now, that is a valid reason to replace the battery. You can diagnose the battery yourself by downloading the Lenovo Solution Center program by downloading and installing it from Lenovo’s official website. Do not download it from any other website because it is very likely a virus or some other type of malicious software.

Removing the battery from a Lenovo laptop is not very difficult. If your battery is removable, it is as simple as releasing a few latches. If not, built-in batteries are also relatively easy to remove. You will have to open the laptop, though. It would be helpful to wear an antistatic wrist strap just in case if you have to open it.

Once you have removed your battery, putting the new one in is also very easy. You pretty much have to do the steps in reverse and allow it to charge completely before using it. Do not use a battery that is not an original part because you are risking the battery blowing up and it may have a lower battery life than the original one.

You May Also Like: How to Fix a Laptop Power, Jack, Without Soldering

Lenovo vs Dell: Which Laptop Brand is Better?

ASUS vs Lenovo: Which Laptop Brand is Better?

Lenovo vs HP: Which Laptop Brand is Better?

How to Connect a Laptop to a Blu-ray Player Wirelessly