How To Use Your PS4 Controller With Your Laptop 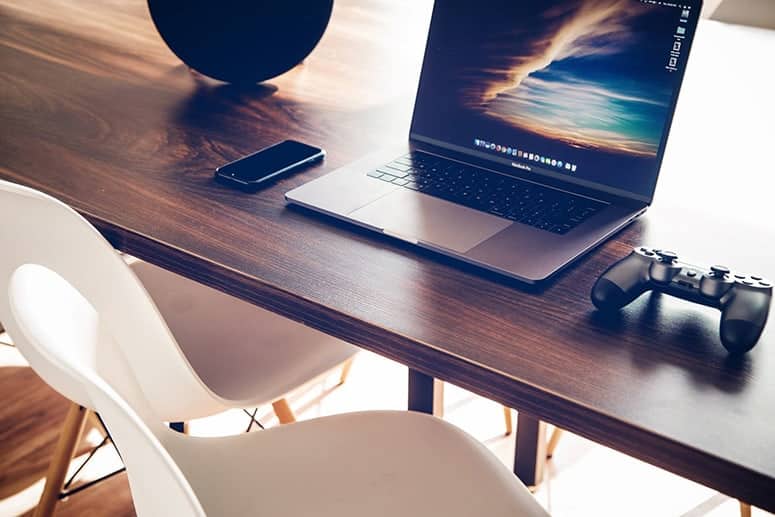 Have you ever wondered how hard it would be to use your favorite PS4 Dualshock controller with your laptop?

The controllers now bundled with the PlayStation 4 are widely recognized to be some of the best gaming controllers ever.

The PS4 DualShock 4 controller uses a button layout, with all the buttons needed for most controller-based games, dual analog sticks and a capacitive pad that can even be used as a mouse pointer.

PC gaming purists would argue that a keyboard and mouse setup can’t be beaten, with unlimited customization options available.

That may have been true in the past, when the majority of first-person shooters (FPS) initially appeared on PC and were later ported to consoles.

Most of us remember using a mouse/keyboard combo in Quake death matches.

However, the majority of modern games are now designed for consoles, with a PC version coming later.

Games like the Dark Souls series utilize the analog sticks, allowing you to control the walking/running speed of your character to creep up on enemies.

For driving games, a controller is a must. One of the more popular online games, Rocket League Soccer, is virtually unplayable without a controller.

This competitive mashup of racing and soccer benefits greatly from the wider axis of steering that the controller offers, and more stable control of the camera view when switching between the ball and your car.

Fortunately, setting up your laptop to use a PS4 controller is relatively simple.

With Windows laptops, it would be easier with an Xbox 360 controller, but that’s Microsoft for you including a 360 controller driver as standard since Windows 7 – “buy into the Microsoft ecosystem please!”

Ironically, the Mac-based laptops make it more difficult for Microsoft controllers, with third-party software needed to use a 360 or Xbox One controller.

Connecting A PS4 Controller To Your Laptop

On both Windows and Mac OS X laptops, you can choose whether you want to connect the PS4 controller with a Micro USB cable or wirelessly via Bluetooth.

You can either use the Bluetooth built into your laptop or purchase a third-party adapter.

In their quest to make the PS4 controller compatible with Windows and Macs, Sony has released an official dongle.

The easiest way – by far – on both Windows and OS X laptops, is to purchase the official Sony DualShock 4 USB Wireless Adapter.

These can be found in your local Sony store or from many of your favorite online retailers.

The Mac and PC operating systems don’t support a PS4 controller as a plug and play device but the wireless USB adapter is a solid work around that.

You simply plug the adapter into an available USB port and allow it to install the drivers before pairing your PS4 controller with it.

Although it is more expensive than similar USB Bluetooth adapters, the out-of-the-box functionality makes it worth the extra outlay.

With the Sony adapter, you can customize every feature of your DualShock controller, including the buttons set up, analog joysticks, touchpad, light bar, motion sensors and vibration.

Pairing it is easy  – push the drive into the USB slot for about three seconds and then hold down the Share and PS buttons together on your controller.

To pair it back with your PS4 again, you just need to connect it with a Micro USB cable to your console.

You don’t have to stick with the Sony official USB adapter.

Any third party Bluetooth USB adapter could be used to connect your PS4 controller, as long as it supports the Bluetooth 2 standard.

You can also find much smaller USB Bluetooth adapters, if having the 3-inch Sony adapter sticking out of the side of your laptop is an issue.

Using Your Built-in Bluetooth to Connect a PS4 Controller

If your laptop already has Bluetooth built in, you can use this to connect to your controller.

Again, it needs to support the latest Bluetooth 2 standard and you should ensure you have updated your drivers, if necessary.

The method is the same for both Windows and Macs.

It just requires you to switch on Bluetooth and press and hold the PS and Share buttons for about three seconds until the light bar on your controller begins to flash.

In Windows 10, you will need to click on the speech bubble, which appears in your taskbar at the bottom right of your screen, to open up the “Action Center”.

From here, click on “Bluetooth” and then select “Wireless Controller”. The computer may ask for a pairing code, in which case, enter “0000”.

When the code is accepted, your PS4 DualShock controller is connected to your PC.

On a Mac, it’s pretty effortless too.

Simply open the “System Preferences” menu, click on “Bluetooth” to switch it on and put the controller into the discovery mode by holding down the PS and Share Button together. When the light flashes quickly, “Wireless Controller” will appear in the Bluetooth window and click to “Pair”.

Once it says connected, you can now use the controller with your Mac.

Note: If you are running Windows 7 or earlier you will need to download the Xbox 360 controller for Windows software on your computer.

Simply head to the Xbox 360 controller for Windows page, click on “Downloads,” and then select your OS and language. Once the file has downloaded and installed on your laptop, restart your computer and connect the PS4 controller.

If you have already installed this software on your computer, you may need to check for an update to ensure it is working correctly. Windows 8 and Windows 10 now come with the latest drivers pre-installed.

If you want to go old school with your gaming, you could always link the PS4 controller up to your laptop with a Micro USB cable.

These are similar to the cables provided with Android mobile phones and will charge the battery of the controller at the same time. You probably got one already with your PS4 but, if not, they are easy to get hold of.

On a Mac, it is relatively simple, although PC connection can be more demanding due to the system only officially recognizing Microsoft XBOX controllers.

There are third-party solutions, like DS4Windows, which we will look at in a few moments.

Let’s get the easy one out of the way first – the Mac connection by USB.

Simply connect the PS4 controller to your USB slot and press the PlayStation button in the middle of the controller to power it on. Click on the “Apple” logo in the top left hand of your screen and select “About this Mac.”

Click the button labeled “System Report” and then choose “USB”. Under the USB heading, you should find a “Wireless Controller.”

If so, then it is connected to your Mac, even though it’s connected with a cable. You can now use the controller with all compatible games, including those downloaded from Steam.

On a PC, unless you are happy to only play games downloaded from Steam or with native support for a PS4 controller, you will need to download some third-party software that maps your PS4 DualShock settings over an XBOX 360 controller mapping.

Most Windows games are only configured for use with Microsoft compatible controllers. There’s no official list of games which support DualShock 4 controllers but you can find substantial resources at iPCGamingWiki.com

Connecting the PS4 controller by Micro USB to your Windows laptop is straightforward enough, as long as you have the XBOX 360 controller driver installed that we spoke of earlier.

Just plug your controller into the USB port of your laptop and Windows should automatically recognize it when you press the PlayStation button to power it up.

You can check in “Device Manager” under “USB” that the controller is connected. If you are using Steam or a game that natively supports the controller, then that’s the end of your task.

If a game or service doesn’t support the PS4 controller, that’s when you need a third-party emulator, like DS4Windows.

The following YouTube video looks at how you can use DS4Windows to get your PS4 controller working on your PC with non-supported games.

Ways of Using Your PS4 Controller on Your Laptop

Steam, the most popular gaming portal for PCs and Macs, now offers full native support for the Sony DualShock 4 in the majority of their games.

All you have to do is ensure your Steam client is up to date.

Plugging your controller into your PC or Mac after powering up Steam will force the game to recognize your PS4 controller. Of course, some games like Dark Souls III may not yet recognize the controller, even though Steam does. In cases like this, you may need to use a third-party app, such as the earlier mentioned DS4Windows.

Many other games you can buy, for both PC and Mac, will state they are DualShock 4 compatible or may have screens where you can map the controller yourself. Another option is to use your Windows laptop, if it’s powerful enough, for Remote Play of a PS4.

Sony Remote Play only supports DualShock 4 as standard, so you won’t have any problems there.

Adding a Sony PS4 controller to your laptop doesn’t have to be complicated.

Personally, I would recommend choosing the official Bluetooth adapter from Sony, as it works out of the box.

Gaming with friends can be much more fun when you all have your own controller, and this solution from Sony supports multiple controllers on the same adapter.

Who wants to be sharing a keyboard anyhow, when mid-game in Rocket League?

Yes, You Can Install Windows 10 on Your MacBook.